Can someone tell me what is going on in SPN fandom? Specifically with fic? I have seen two prolific authors I regularly read delete their LJs; one disappearing without warning, leaving us all scratching our heads (and scrambling for copies of stories), the second posted an explanation that some anon comm (community? comments?) had gotten so cruel and nasty (and that a Google search could link back to her IRL) that she is abandoning LJ (and J2) entirely and moving her fic archive to Sinful Desire.

I'm also seeing really defensive A/Ns on yet other fics. And now there are authors talking about being afraid of posting their stories.

What is going on??

Ausiello says so (and it's confirmed!)

Caught a bit of "Accidentally on Purpose" last night (Jenna Elfman is adorable, what can I say) and the hubs and I both realized that Grant Show looks just like "my boy" (as R calls him) Jensen in, say, 15 years. 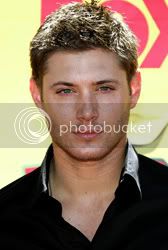 I don't know why I watch the Emmys and expect the shows I love to get any respect.

1. SPN is not shown in the 'year in drama' montage. I'm not really surprised, but I was hoping. They showed True Blood, so I guess one genre show was included.

2. Aaron Paul was ROBBED. There's no way that guy from Lost was as amazing as he was this season.

3. Kim Manners isn't shown in the "In Memoriam" list. Fred-freakin-Travalena was shown.

The only thing saving me is my enduring love for the NPH. (Oh, and that Bryan Cranston won.)

I'm annoyed, yet also giddy at the same time. How can this be?

Annoying:
1. I'm on the Steve Carlson e-mail list, and tonight he has a show in Vancouver. And you KNOW who will be there. I'm annoyed that I live v. v. far from Vancouver. :(

2. I have all the episodes of Harper's Island on my downstairs TiVo. I wanted to record them all before watching, just in case the show tanked and the network didn't show all the episodes. Well, all of 'em were shown, and last night I finally was able to sneak away to watch the first episode. (It's hard to watch a horror-themed show out in the open with two young, way-too-curious boys!) It was really well done! (Plus, I love Katie Cassidy, no matter what her hair color is.) So what's annoying about that? I went to the IMdb to see where I'd seen one of the actors before, and I think I accidentally spoiled myself for who the killer is! Dammit! I'll still watch the eps, to see how s/he did it, but it's not the same. *pouts*

Giddy-making:
1. In about 90 minutes, I'm going to the Apple Store to get a new MacBook Pro! My six-year-old PowerBook G4 has about 10 years of use in it, and I'm soooo due for a new one. *fistpump*

2. I recently applied to my local community college because I want to audit an introductory graphic design class this semester. I'm a self-taught designer, so I want to brush up on the fundamentals I never really learned. But what's a v. cool side benefit is that Apple is running a "Buy a Mac for College, Get an iPod Touch for free!" And since I'm a registered student at my local institution of higher learning (with the acceptance letter to prove it) the hubs will get a free iPod Touch when I get my new laptop! (I already have one.) How cool is that??

proof that there's a someecard for everyone:

And yes, embarrassingly, this speaks to me. I haven't even seen Twilight! *headdesk*

Also, thanks to all those who took my very first poll! :D

In the wake of the constant media coverage of Michael Jackson's death, his "complicated legacy" keeps coming up in conversations -- specifically, the accusations of child molestation leveled against him. I have friends who absolutely believe he was a pedophile, and I have friends who think he was just emotionally stunted and just plain weird. Fortunately, I don't have any friends who are at risk of committing suicide over the emotional trauma of MJs death. *rolls eyes* Really?

But here's my question.

Open to: All, detailed results viewable to: All. Participants: 9

What are your feelings about the King of Pop?

I think he was an amazing talent, and I am devastated at his death.
4(44.4%)
He was odd, but aren't all famous people a little crazy?
1(11.1%)
Undeniable contribution to music, but he *did* have inappropriate relationships with children. Not going so far to say child molestation, though.
4(44.4%)
Straight up pedophile. Kids the world over are safer today.
0(0.0%)
Tickybox!
0(0.0%)

If your answer is "Other" (something I haven't included) educate me in the comments. I'm really curious to see how my flist shakes out on this.

Sorry I'm being so spammy today!

poor_choices, not only for her awesome J2 fic, but also for introducing me to someecards.com via her When You Care Enough to Hit Send 'verse. There is no better place to go for just the right snarky, sarcastic message to send to a loved one.

And in honor of Gay Pride Month, here's one of my recent favorites:

Is anyone out there as obsessed with the Mark Sanford story as I am? I can't get enough of it. Dude flees the country without telling ANYONE where he's going, leaves no one in charge when he does, avoids his 4 young sons over Father's Day. Seriously bizarre.

R works in city government, and if the city manager is going to be staying overnight in a city two hours away, he puts someone else in charge. IMO, that's Sanford's impeachable offense (well, that and hooking up with his luvah during a state-paid trip to Argentina), not that he was unfaithful to his wife. That just makes him a douchebag. But you don't go take a walk on the Appalachian Trail an "exotic" (WTF??) trip to Argentina FOR A WEEK without naming someone to act in your stead.

ETA: Once again, someecards hits the nail on the head:

If you watch an as-yet-unreleased, two-year-old, average horror movie starring the ex-girlfriend of one of your TV boyfriends. (Film was House of Fears, starring Sandra McCoy.)

However, the silly fangirlishness paid off with a 5-second cameo of Mr. Padalecki himself. Woo! (Damn, that boy's fine!)

Honestly, I'd probably watch a movie with Danneel if I came across it. (I think she's in Fired Up, isn't she? I'll add that to the Netflix list.)

Also, I'm stunned and saddened at the loss of Michael Jackson. For all his later-in-life freakishness, I was one of the obsessed preteen masses when Thriller blew up. I would've had the zipper jacket had I been able to afford it. (I did have the sparkly socks, tho.) I was SO in lurve with him then.

I had a folder with this photo on it, and I carried it 'til it fell apart.

It's the end of an era. RIP, MJ.
Collapse